People, people, people. Sooo amazing, this first part of the fall 2017 tour !! Forst, Jena, Berlin, Unna, Frankfurt, Kaiserslautern and Siegburg – You killed it !! And just in case it isn't 100% clear yet: We're so happy to tour with the Maerzfeld guys. It's great fun and we're absolutely happy to rock this together !!
Right at the beginning of this tour, Maerzfeld suffered the sudden and unexpected loss of one of their colleagues. Still, they decided not to cancel the tour, but instead honor the deceased fellow musician by celebrating a true ‚Rock On!' in accordance with his wishes. Mearzfeld thank all of you, because it really helped them to overcome the lump in their throats. Tears of sadness merged with tears of joy. Such is life, sometimes, and it's far from easy to find the right way to deal with those things sometimes.

It's also most impressive time and again to see some of you guys travel pretty long distances in order to come and see a show… Wow !! And not only that – there are quite a lot of you who keep coming to almost each and every show .. that is sooo amazing !! These facts create such a warm feeling of connectedness, home, and, yes; it's somewhat like ‚family'. Sometimes we're almost having a queasy conscience upon seeing all the love and effort some of you keep putting into new ideas and special gimmicks for the shows. Which we actually see as part of our job ;)))

So, we try to give back what we can… and to those among you who distibute flyers, do postings, share events, deliver HM goodness to online forums, help with online votings and, and, and … Thank you guys, that is super cool – and it does have an effect !!!

We're not reacting everytime, since it is a lot, and quite diverse, what you do in order to support us. But we can see it !! That is why we use this opportunity now, to say another THANK YOU to you without calling out single names. Youn know who you are ! We truly feel all the love you put put into your Heldmaschine and it is joy and incitement for us at the same time ! („Oh my God – What shall we do for them on the next tour !??")

So here are all the pics with you guys from all the shows of this first part of the fall tour 2017. 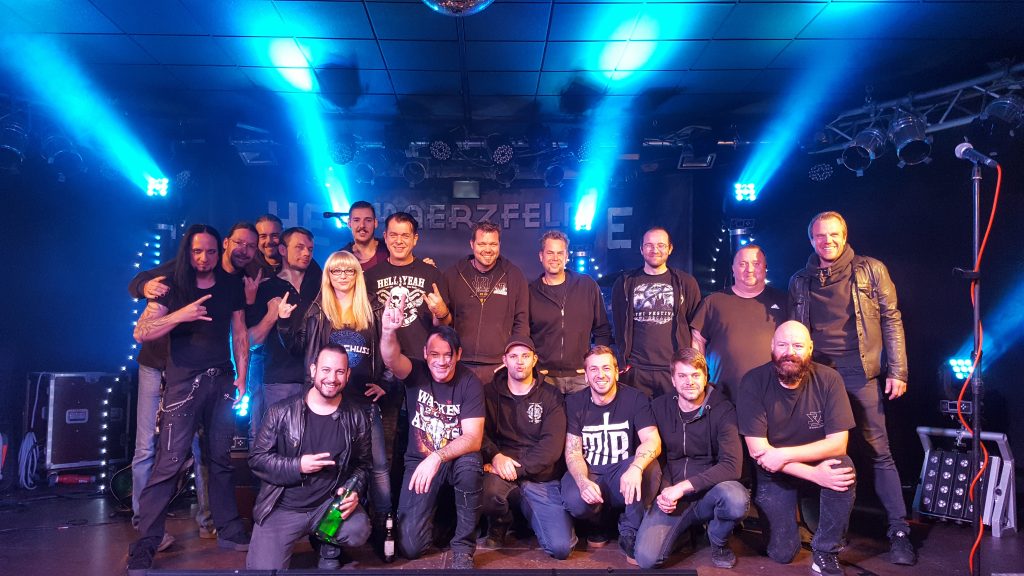 And we also have a little timelapse for you guys, filmed seamlessly from taking the last photo after a show with you until the end of the strike-down of the entire stage. In this case, it's running backwards … and 3000 % faster than realtime ;)) Also running backwards is the short sequence at the end: That's all of us in one pic that shows both bands and their respective crews. All of these nutcases are on the road together for you !!

We also owe this pic to our crews, who bend over backwards every night so that everything runs as smoothly as possible. Which you can see in the vid – that's quite a few people there on stage making sure everything's packed up neatly. And the effort increases from tour to tour… sound guys, lighting guys, merch guys, tour managers, hands (= helper while loading / unloading), also drivers for the busses plus trailer, and, and, and. So: THANK YOU, CREW !! Without you, nothing would work !! And WITH you, and us, and all the fans … EVERYTHING is possible !!

See you back in Wuppertal, Hameln and Dresden !! Woooooooohoooooo !!