Wow, there is A LOT going on these days. You've all seen it already: In February and March 2019 we'll finally be back on our own headlining tour all across Germany ! We don't know yet who our Special Guest will be - rest assured; you'll be the first to know ;))  Let's see if we can manage to present our new album 'Im Fadenkreuz' ('In the firing line / crosshairs') then ... wer're working on it and we hope that all will come out well.

The second half of said March 2019 will send us on an European tour - together with german rock heroes Oomph! !! We'll be playing in England, France, Switzerland, Austria and the Czech republic !! We're very very much looking forward to all the European capitals we'll hit ... as this is our first EU Tour !! Exciting !!

As if that wasn't enough of good news - Heldmaschine are confirmed for M'era Luna 2019 ... awesome !!


And what did we do in the meaintime ? Until June, René had to move out of his recording studio... so the old huge mixing desk was sold, transported off - and then we tore down the entire place, as it was the will of the landlord. Oh well. Then the rest of the studio moved, and now we're slowly going back to a normal recording routine.... well. almost. But not only did we swap studio places - the Heldmaschine fleet needed an upgrade, too. Indeed it was time for a new tour bus... which should also carry some beds among other things (as it is a good idea to be able to take a nap when you're on the road for weeks...)

And René had a plan. Well, not just one plan ... many, many plans. Drawings, to be exact. Calculations, shopping lists, materials researched. And the new bus. He got it. Including his very own detailed plans for the completion of the interior by himself. With a little help of the rest of us. It took weeks and thus would have been totally un-affordable to have it done externally. But as René is a proven carpenter by trade (as well!) he knew hat to do. Including some extras that we'd love to have on board when being on the road. So that new Bus first of all got a second battery (imagine 8 guys charging their phones, an icecold fridge, a blasting stereo etc etc) and we were called to work. In the carpentry, the joinery and even in the welding shop. Nothing like craftsmanship ! And René really has outdone himself once again - check this out .... 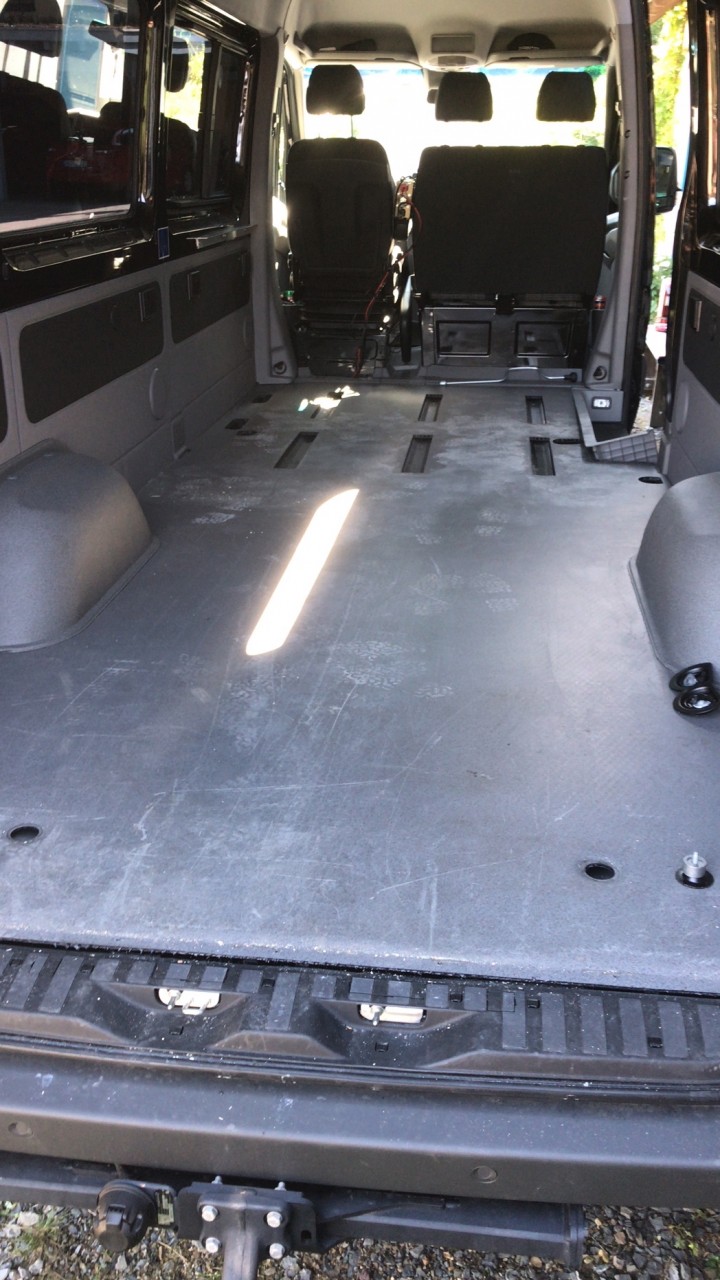 This is the new van. Completely emptied; all seats removed...

.. and the first thing to do is some new flooring ! 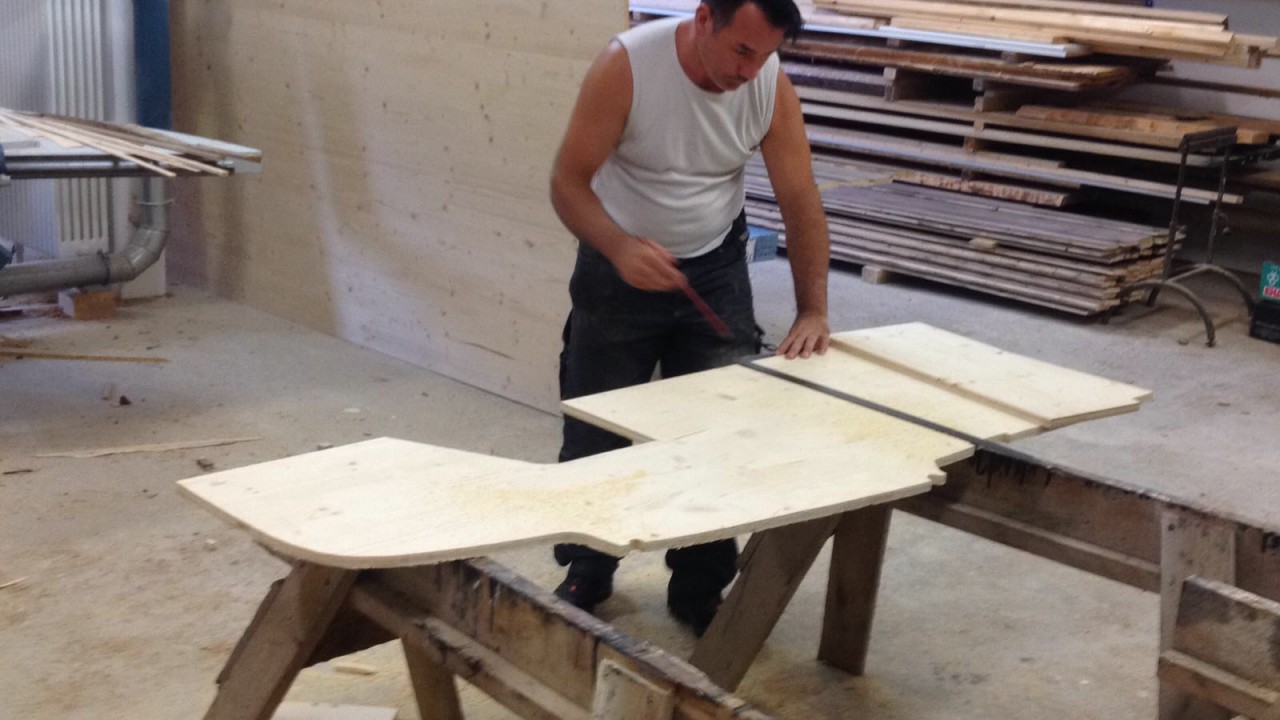 Next up: The joinery. Countless parts have to be cut ... a long list, meticulously planned by the man himself .-.. 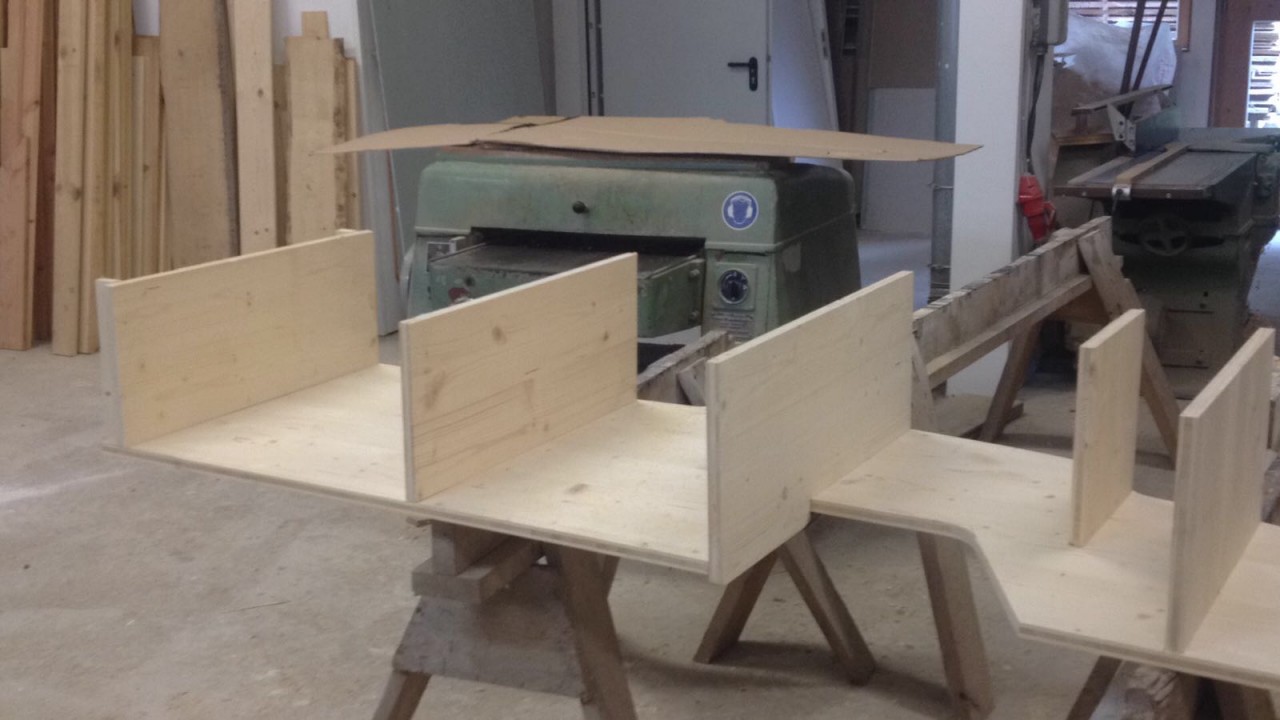 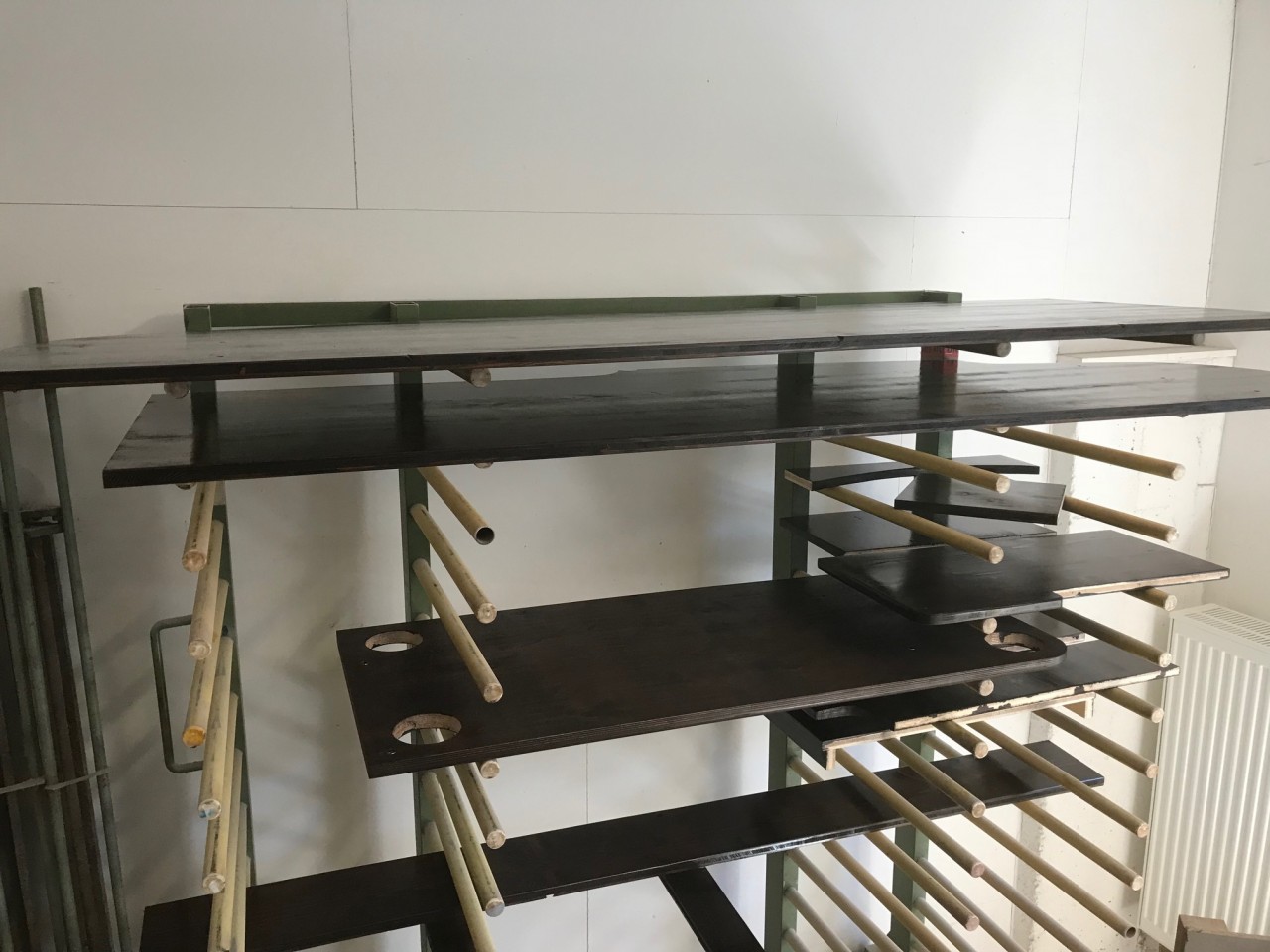 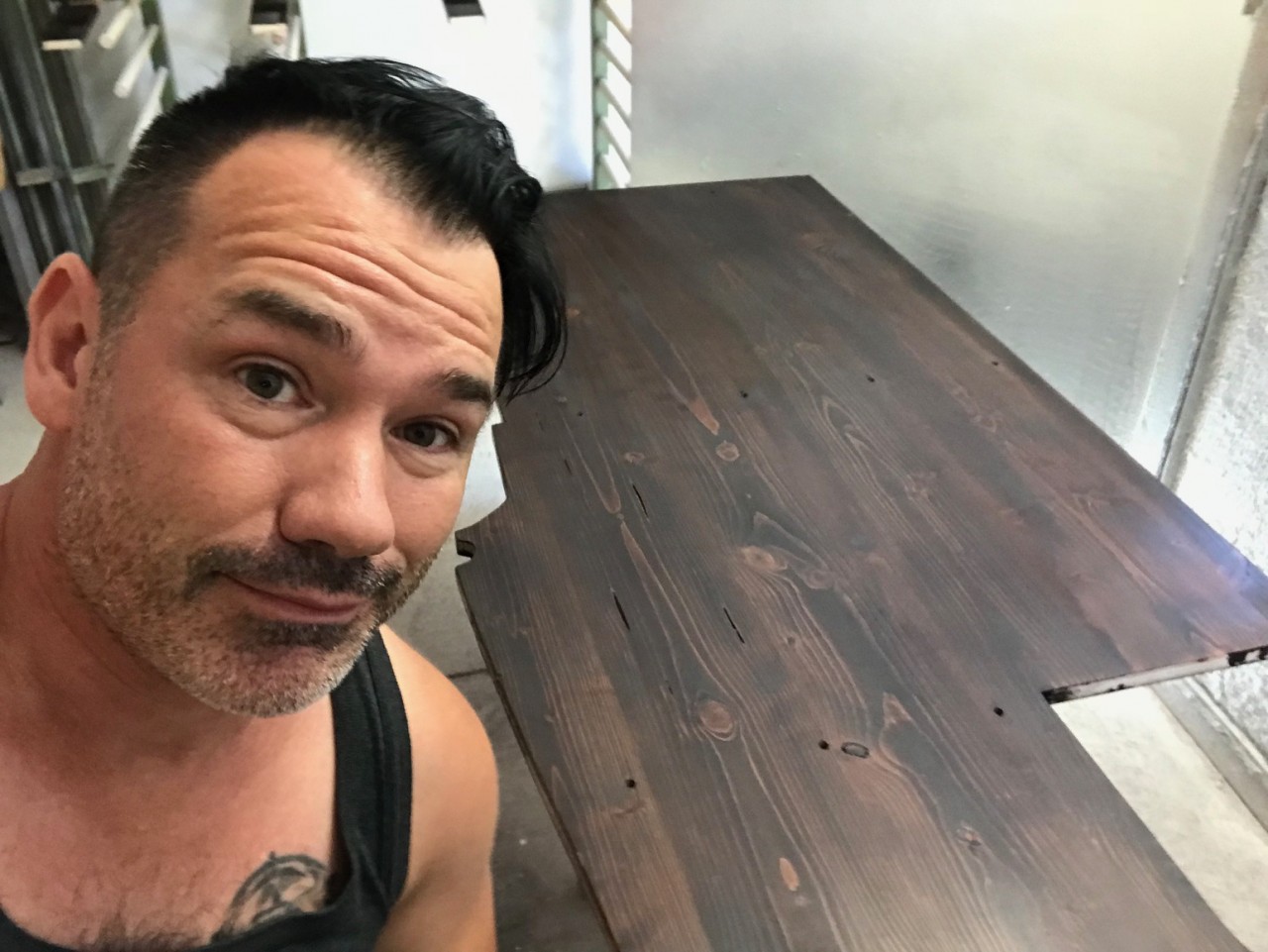 Some day, when you're grown ... you'll be an interior wall. 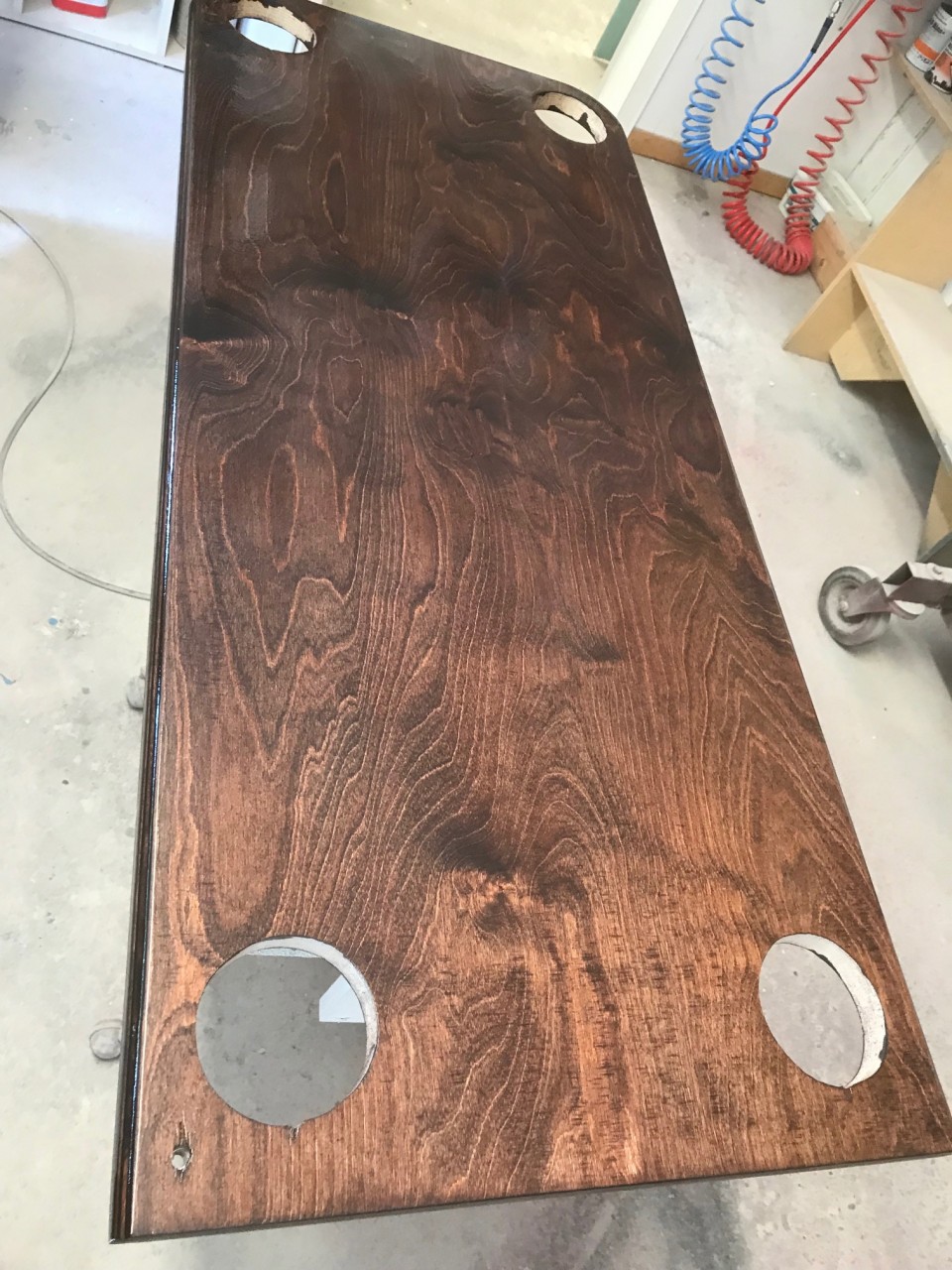 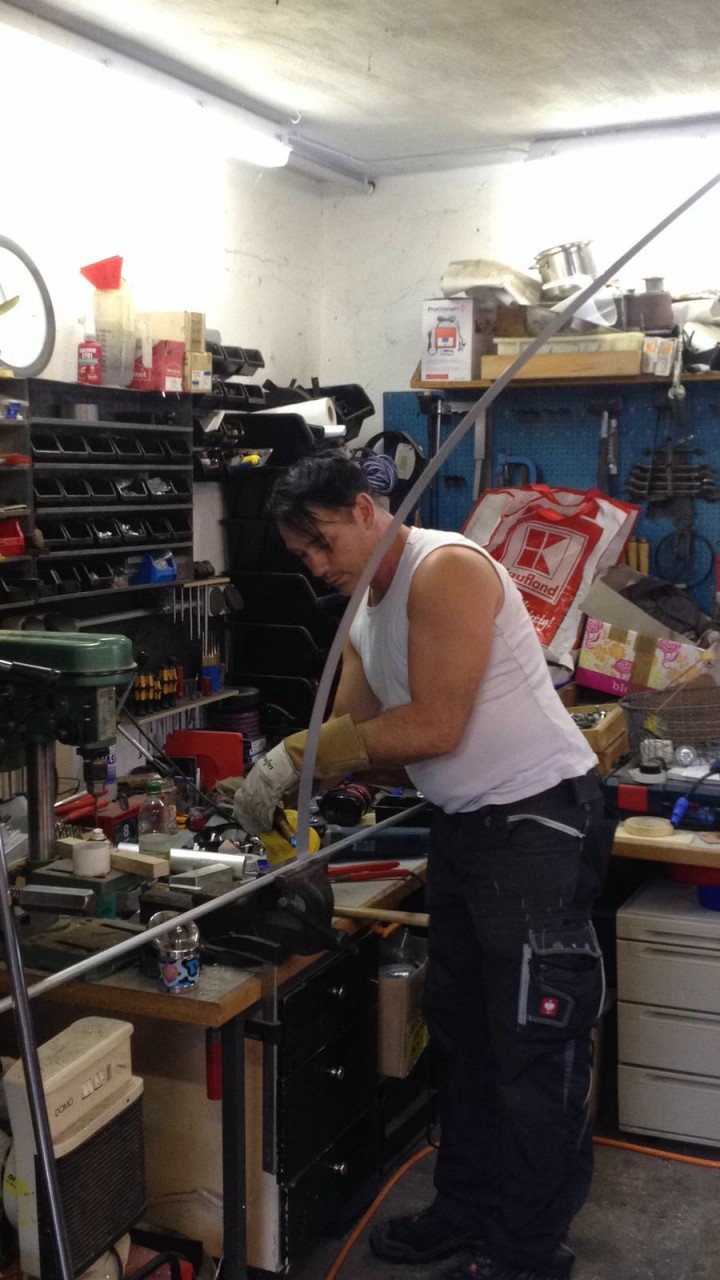 Back to the welding shop. We need a lot of individual 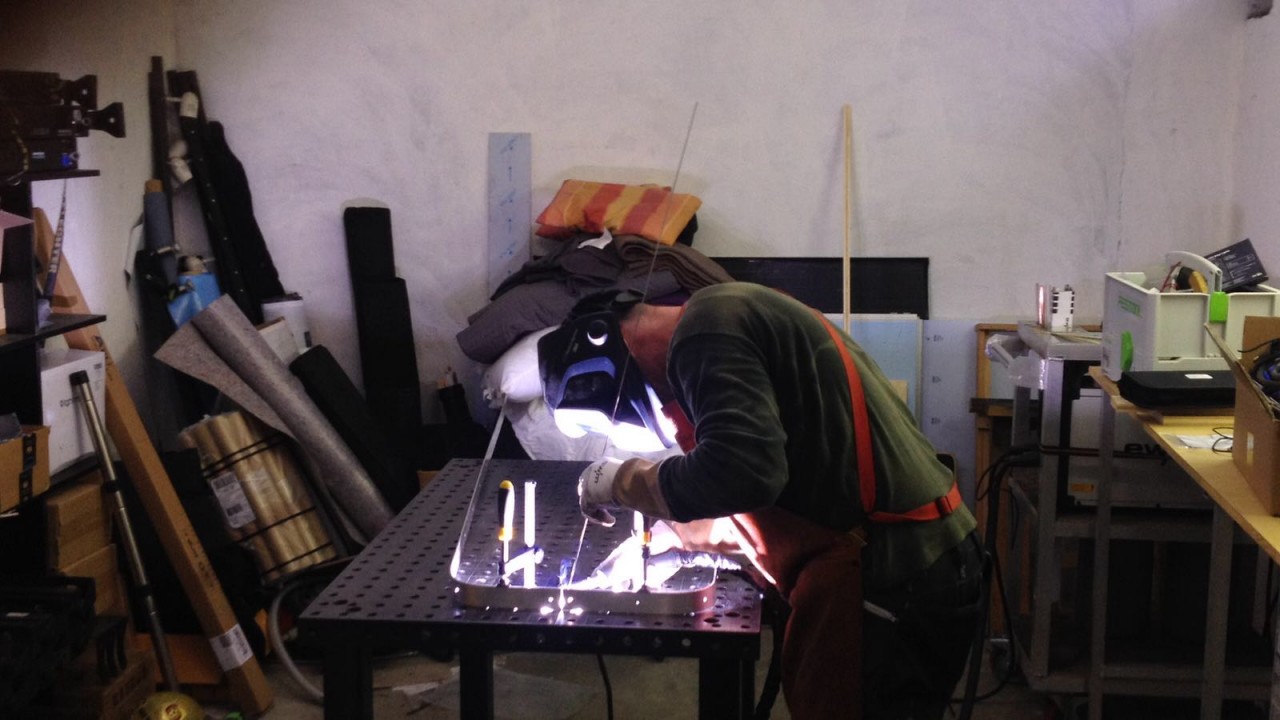 Yes, René can weld. Ever saw our 'Die BRaut, das Meer' video ? That is REAL work being done in there; no fake. 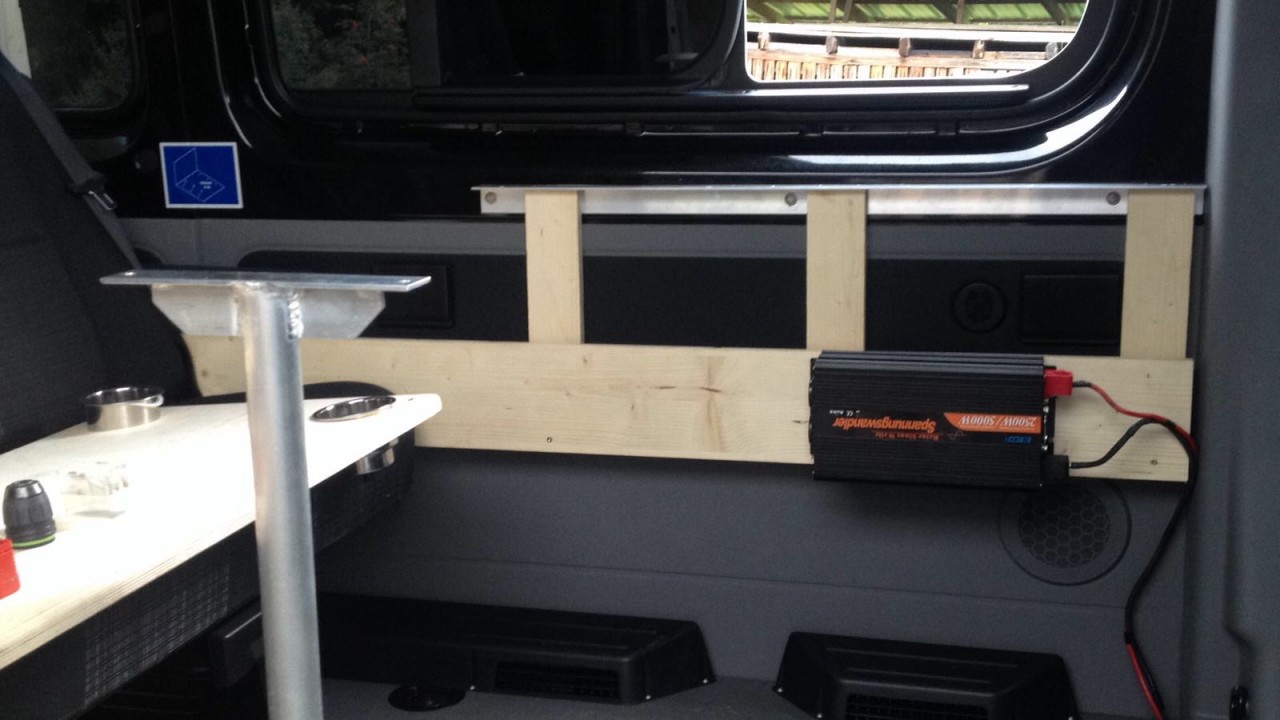 Yep - this one will carry the table later. The black box transforms the van's 12 Volts into 230 Volts... for convenience. And finally, a fridge ! 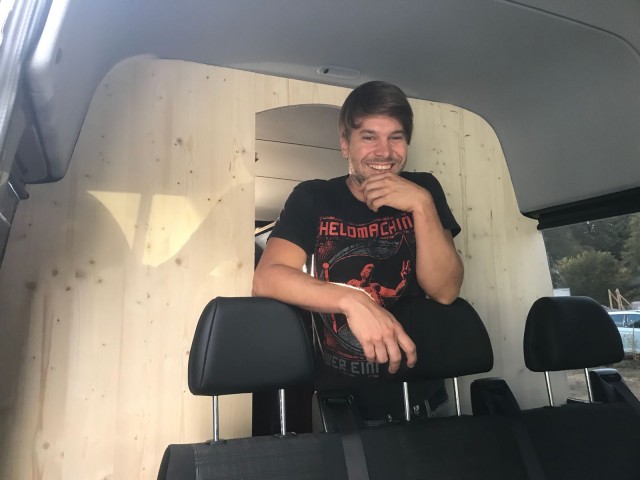 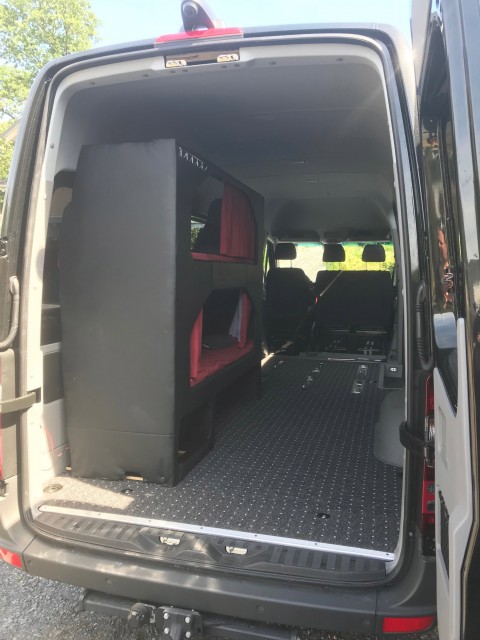 Here come the bunks, pre-bulit in the carpentry ... first, the left one ... 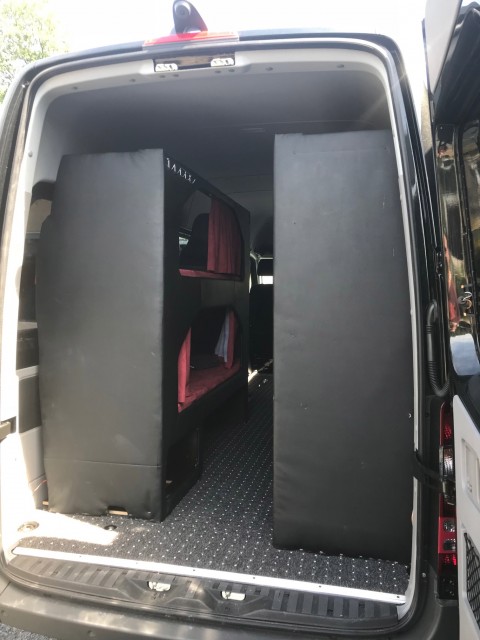 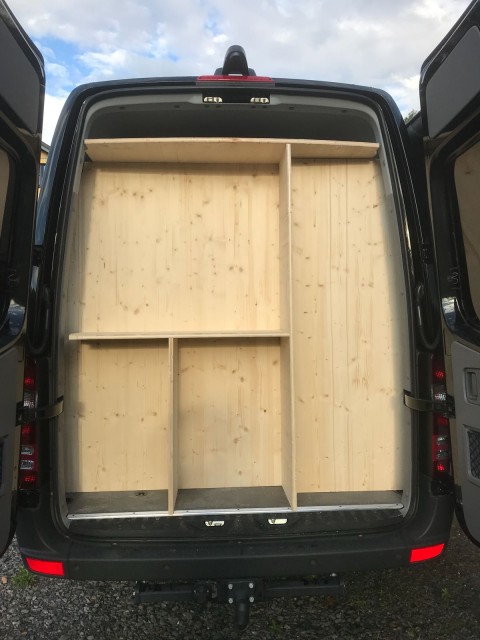 .. but it wouldn't be complete without proper jacketing. Space for suitcases, bags and even entire business suits... if needed ;) 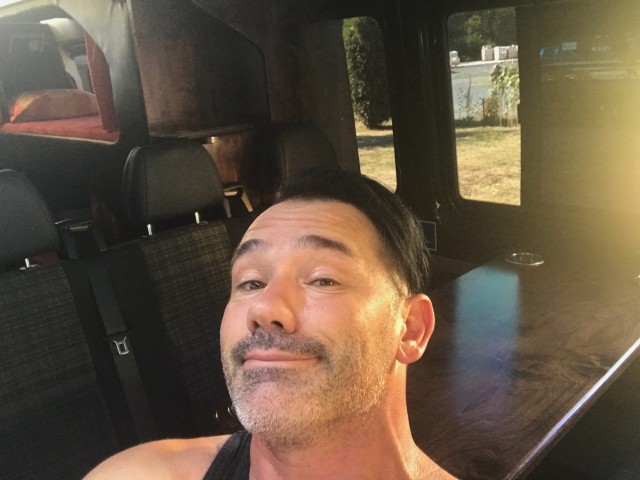 Been working on thos for how many weeks now ? Don't even ask ... 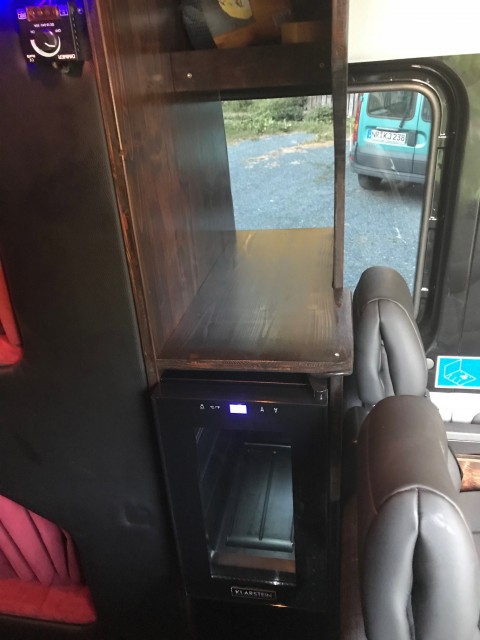 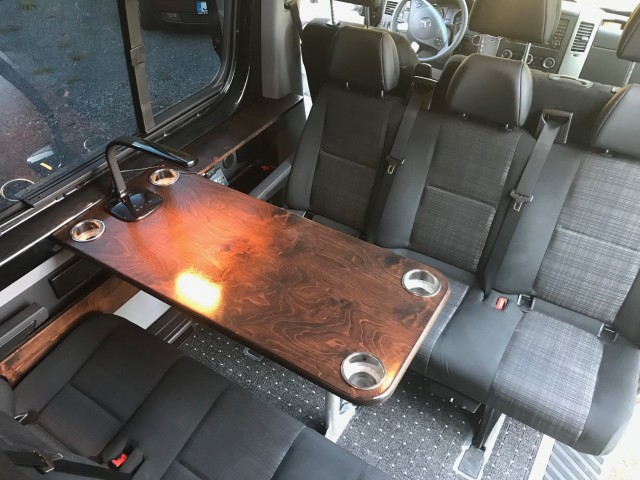 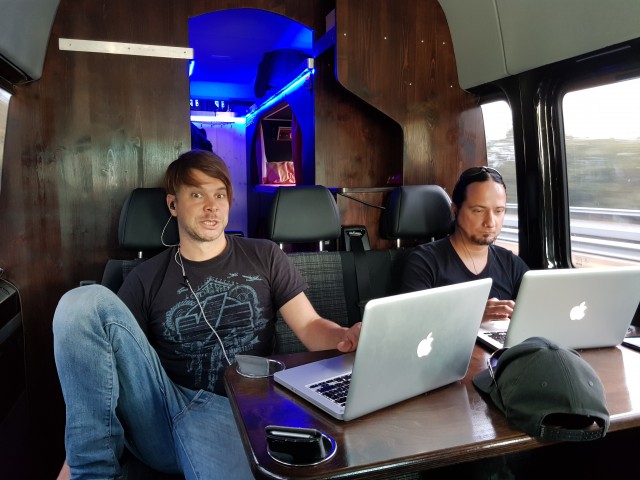 SO happy with the new van ! CAN'T WAIT to tour again with thiat baby !!

Update: René has done it again. Of course he wasn't satisfied with the overall air circulation, especially at night (when a few of us might snore snugly in the back... u know what we mean). Time for an ac unit inside this brandnew van. First up: custom mounts... 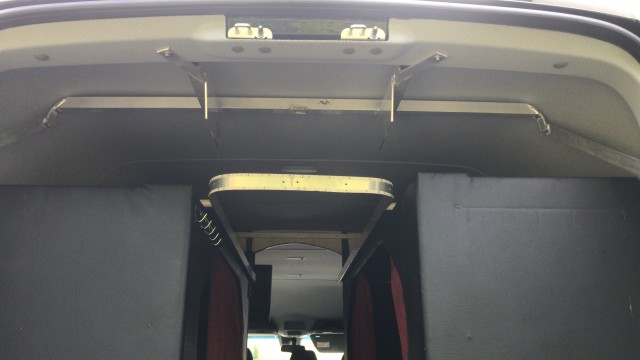 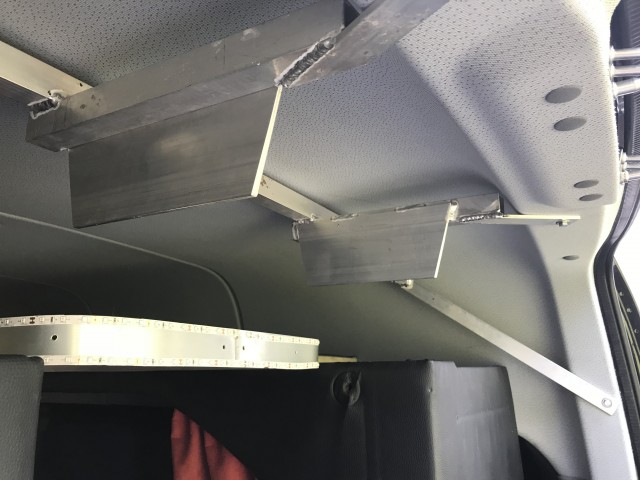 Yes; these were aluminium welded ... 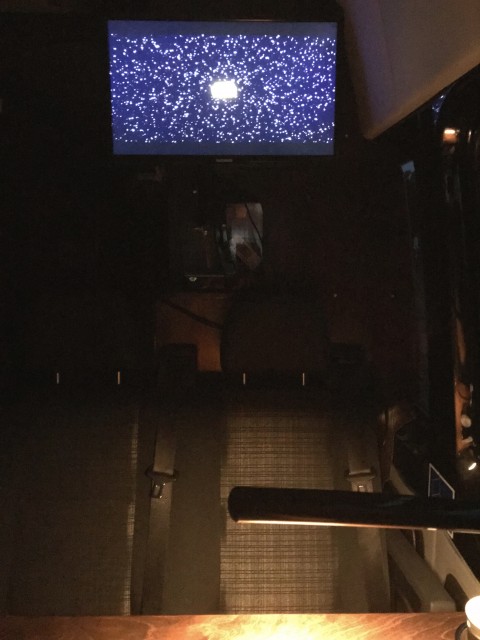 Yes, we now even have ViDEO in there. Heheh.... and that is plain AWESOME !!

But what would this tour van be .... without the crown jewel of touring life ? Riiiiiiight  !!!!