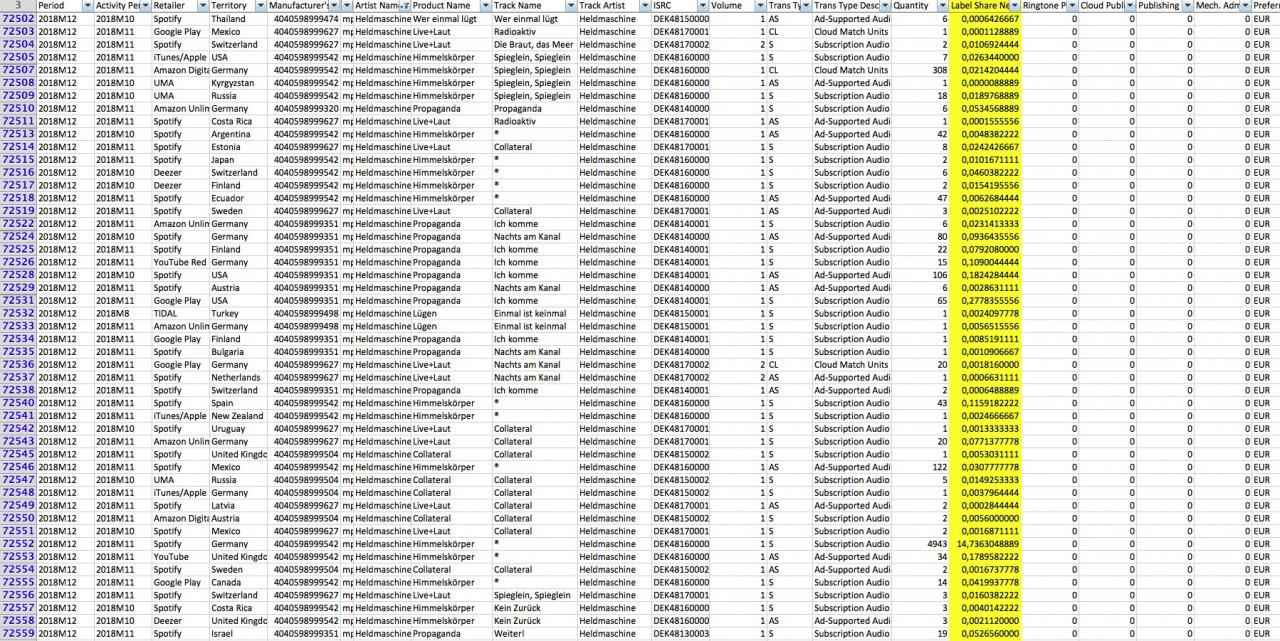 This screenshot is one page taken out of a typical streaming revenue excel sheet. We get one every 6 months. It lists every single time a Heldmaschine track was streamed somewhere. That excel sheet is about +80 pages long and it keeps getting longer by the day. Which is supercool because it proves more (and new) fans are listening to Heldmaschine worldwide every day. We can see all the countries that listen to Heldmaschine, and all the streaming platforms that are popular, and we can track on a day by day basis which songs were heavily streamed, and where. So far so good.

The downside of streaming is the payback. In capitalism this is also called the ‚return of investment'. When Heldmaschine record a new album, no one pays Heldmaschine to do it. It's Heldmaschine themselves who take the risk and pay for the weeks of work in the recording studio. Heldmaschine also pay for the design and artwork of the album, and Heldmaschine pay the manufacturing of CDs. Heldmaschine pay for the design of all new merchandise and for printing and manufacturing of basically everything from tour posters to free video clips on Youtube. (CDs and shirts are printed in Germany. Not cheap, but we always try to ensure max quality). So all in all, Heldmaschine pays the people who do professional work for the band, and that is fair. They all do a great job! However, trying to sell the music itself - this is where things go crazy. If Heldmaschine sold ten thousands of CDs, all would be well. This is not the case, because people have turned to ‚streaming' their favourite music instead of ‚buying' it in the form of a physical product. Paid-for downloads are also on the way towards extinction. And naturally so: Your favourite streaming service may cost you 4,99 a month, or even less. Often music streaming services are included for free in other services. That single fee some of you pay for your streaming service covers EVERYTHING you stream, no matter how many times you listen to a song. And no matter which songs you stream, which bands you listen to - it's all the same for the listener, which admittedly is very, very convenient.

This is where our excel sheet comes into play: We receive our 6-month-streaming excel sheet, it is more than 80 pages long - and the total amount is a mere few thousand euros. Which would not even cover a few days in a recording studio to begin with…
Why ? Most streams pay back in the area of below 0,001 Cent per play, thats why. And unless you are Taylor Swift, Kanye West or Metallica, that streaming money is, well, sorry, close to irrelevant.

The yellow column in the screenshot shows what we get. In Euro/Cent.

However, no complaint. We're just trying to explain why every single CD we sell (and we are NOT feeding a huge record company apparatus here, unlike most ‚bigger' bands do !) helps to keep Heldmaschine alive. We know we can't force people to go back to the CD format. We cannot turn back time. We can also not ignore the era of dying smaller rock festivals and declining ticket sales. (Hence the creation of our OWN festival brand ‚Nacht Der Helden'…). But for the time being the CD is still popular among Heldmaschine fans, and we are greatful that most of you understand how important it is to still buy CDs.

And while we can still sell CDs, we thought it is a good idea to offer shipping them worldwide! We tried to also do that by ourselves first, but we had to realize you need the entire professional infrastructure of handling various international payment methods, shipping logistics, customer services, returns, customs, taxes etc. So we turned to MAM-Metal Addicted Mailorder as the best possible independent partner. MAM run their business like we do: Self-owned, with no shareholders, no external bosses and no huge apparatus to feed. Just crazy music fans, who love what they do, and love to do it in the best possible way. They are as crazy as us and they exploit themselves like we do. Sleep is for pussies etc… you know the drill.

We also thought it is a good idea to create ‚Fan bundles' or ‚Fan packages' so you can get discounts on various HM merch items. BUT big bundles may become HEAVY in terms of sheer weight. So when it comes to shipping, things can become crazy again with international shipping fees, customs and taxes. Does that mean we should NOT offer heavy items such as books, or entire ‚Fan packages' ? We think not. Even though it is seen as ‚unfair' by a few people who love to scream out loud „I smell Fraud !!".

Here are the official 'standard customer' DHL fees for USA, Switzerland and 'Rest of the world'. 'Service premium' equals tracking and insurance. Which is what all MAM shipments come with. Please compare THESE fees to the shipping fees MAM is asking for. We know DHL is expensive inside the US but if MAM booked FedEx, UPS or USPS (with German origin, as of today) it would get worse as the european part of the journey is the longer one. Just fyi. 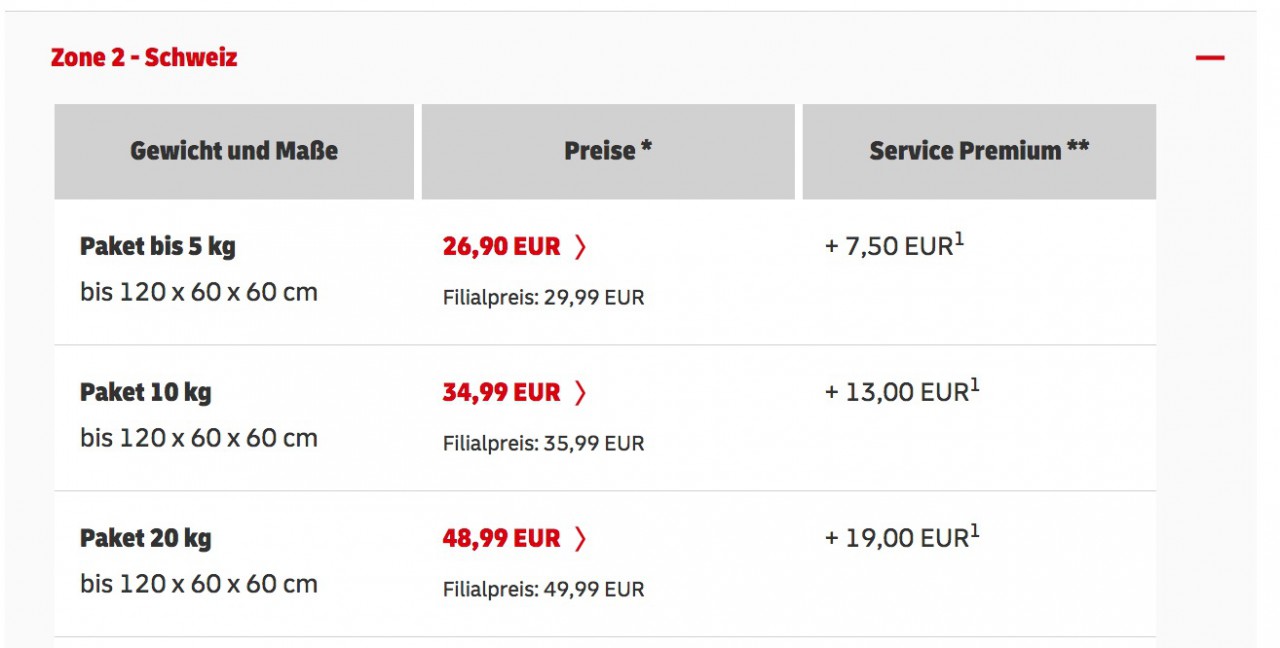 On top of that even the good people at MAM can not change the following facts (and these are just examples. Don't grab your torches now and hunt these people down beause they don't get it)

- Switzerland is a non-EU country and therefore shipping is super expensive (even though it is a neighbouring country… yes that's stupid crazy)
- Mexico is tricky, as most bigger parcels don't seem to reach their final destination, but get lost ‚somewhere' in customs...

- US laws currently do not allow shipping of anything that contains metal (= no HM lanyards, no HM lighters, no HM FanBox w/ LED light etc)
- Most overseas countries ask for ridiculously high shipping fees and/or additional customs and even taxes, as any MAM shipment is a ‚commercial' shipment from customs' point of view. (Which, in fact, it actually is).

Guys, we're very, very sorry. But that's just how it is. That is the system we live in and we have to deal with. The examples above are just a few very concrete cases - there are even more ‚problem zones'. The best we can advise is ‚Think - and Work Together'. Some overseas fans have been very creative: They found fans in Germany who ordered entire ‚Fan packages' to their german address, then re-wrappend and re-shipped that formerly ‚commercial' package as a ‚gift' to their friends oveerseas. In that case, certain fees do not apply to that ‚gift' package. For Mexico the trick would be not to order entire parcels but a single CD album instead. A swiss fan can hop over the border on the next shopping trip or have a friend bring it over … you get the idea.

Thank you for reading all of this, guys. We hope to have made the ongoing streaming and shipping discussions a bit more transparent. There are many more, and other aspects and truths tp this crazy music business as well, and also things keep changing and evolving constantly, so this certainly is not the end of the story. Thanks for bearing with us, and most of all: Thank you very, very much for supporting Heldmaschine !

PS: We're currently working on making the album available as digital download. Yep, a sort of a 'compromise' thing. That will take a few more days as we do not know exactly yet when it will be available. Don't forget that not only did we suprise YOU guys, but also Amazon, iTunes and those platforms as well. Streaming may be added toward the end of this year. Honestly we're not sure yet. But we'll keep you posted.